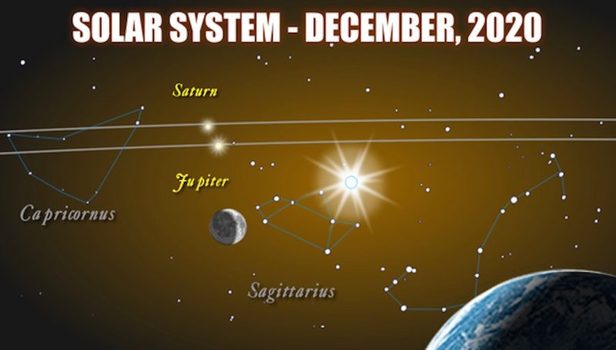 Four hundred years later, Jupiter and Saturn, two planets in the solar system, came so close on 21 December 2020 that the distance between the two was just 0.1 degrees.

According to scientists, they can be seen with naked eyes and also with binoculars or telescopes.

This astronomical event is occurring after 17 July 1623.

The US space agency NASA says that it is not rare for two large planets to come close in our solar system.

While Jupiter passes every 20 years from its neighboring planet Saturn, it is special to come so close to it.

Scientists say that the distance between the two planets will be only 0.1 degree from their point of view, even though this distance will be millions of kilometers.

Dr Crawford at the Institute of Astronomy at the University of Cambridge told the BBC, "The weather is not looking great so this is a valuable opportunity".

If the weather conditions remain favorable then it can easily be seen around the world after sunset.

Where and when will it appear?

The best view of this event will be seen in the northern part of Britain on the night of 21 December 2020 as the sky will be clear there.

This view will not be as clear in the southern areas as the sky will be mostly cloudy.

Planetary astronomer Doctor James Odonohue tweeted where and at what time Jupiter and Saturn would be closest in the sky.

Planetary astronomer Doctor James Odonohue tweeted that at which time Jupiter and Saturn would be closest in the sky on 21 December 2020 and 22 December 2020.

Is this the star of Bethlehem?

Some astronomers and theologians believe so.

Erik M. Vanden Eckel, Professor of Religion at Ferrum College in Virginia, stated in an article that because of the time this event is happening, many speculate that "whether this could be the same astronomical event as in the Bible Is, the incident that brought knowledgeable people to Joseph, Mary and newborn Jesus.

It is said that at the time of Christ's birth, a star appeared in the sky which informed the people about the birth of Jesus Christ and showed the way to get there. Seeing this, three wise kings from the east also reached Bethlehem to offer them, to honor them.

It is also known as Bethlehem's Tara or Christmas Tara. It is described as a divine event.

Says Doctor Crawford, "Two thousand years ago people knew a lot about what was happening in the night sky, so it is not impossible that the Bethlehem star resembled the event of approaching two planets."

The planets orbiting around the Sun are not a rare occurrence but they are special.

Astrophysicist Professor Tim O'Brien at the University of Manchester says, "It is great to see planets close to each other, it happens often but the planets are as close as possible to this event."

Two large planets present in the solar system and some visible nightly shining bodies have not come so close in the last 800 years.

Professor O'Brien says, "These planets must be setting in the southwestern region, so you have to leave as soon as the sky is dark."

"None of us are going to live on earth for the next 400 years, so keep an eye on the weather and if you get a chance, come out and see this place."